Vikings are known for their acts of terror in pillaging and ransacking civilized nations. They are the warriors who board their ships searching for new land settlements where they can take the people’s properties, food, livestock, shelters, women, weapons, and anything they wish to get.

Born in the harsh Scandinavian terrain and weather, these forced them to migrate and find livestock from another place or any land that could help them farm. This challenge in supplying daily resources became the main reason that these warriors decided to move and find other habitable areas to survive.

With the amassed power and various pillaging in lands far and wide, you would wonder where they store the livestock, Viking necklaces, other jewelry pieces, and treasure that they stole, especially the perishable items like food and livestock that they get from other nations.

On a regular day, the Vikings ate twice a day with a healthy diet with a combination of meat, fish, vegetables, fruits, stew, and bread. On more special days, the Vikings have established a way to indulge and celebrate their many victories in supplying what they initially lacked.

They held tons of feasts where all the warriors and their people come and dine together while drinking ale and singing hymns. These feasts had a lot of meaning and tradition for the Vikings. Here are some essential things of what you would see in a typical Viking Feast.

As the Vikings traveled with many people, so they usually made long tables to provide everyone a seat, primarily, the warriors who are mostly responsible for supplying the food from their pillaging.

These long tables became a signifier of unity for those warriors who raided and ate together. It’s a sign of friendship and truce to other Viking warriors to share what they have plundered.

In their eyes, a Viking is like a way of brotherhood that only in their circle is treated reasonably well compared to those who are not Viking warriors.

Other than that, there is a belief that the long tables signify their longing to have more food served at the table as they were used to only getting so little before they started pillaging.

Lots of Candles and Fire 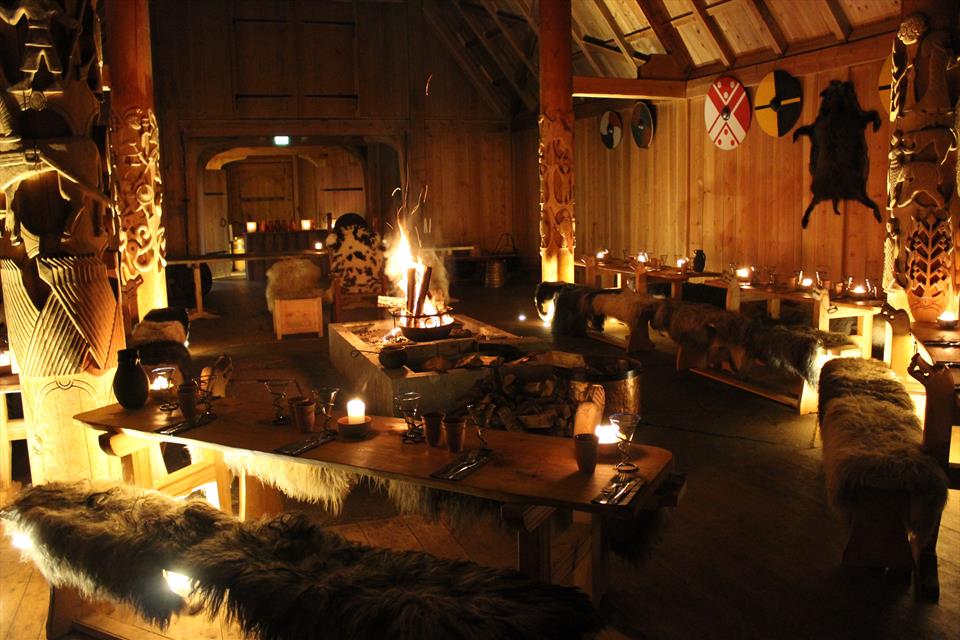 In a Viking feast, you will see a ton of candles that give light to the large room, housing the many warriors for the big dinner. People have not figured out how to use electricity as a light source during those times, so they relied on candles, lamps, torches, and firewood to light during the nights.

Not only did they need lights for eating and sheltering a lot of people, but they also required heat and warmth, especially on those harsh and cold winter nights. Their lands filled with snow, and the weather was unbearable; that is why many Vikings had candles with them on feasts.

Not only did they use fire for heat, but they also used strong ale and mead to get their body temperature up for the long cold nights. Of course, they also needed the fire to cook the food they were going to serve on the feasts. Let’s move to the essential item of a Viking feast.

A feast size usually depends on the capacity of the host to hold a large number of Vikings. As they have numerous feasts during their time, they have amassed great wealth from those nations they have raided.

When you go to a typical Viking feast, ale and mead will be the first you’ll notice as the place is surrounded with barrels to supply the warriors’ demand for their alcoholic drinks. The next thing you’ll see is at the center of the long table, the big meat either from pillaging or hunting. They may be roasted or boiled meats of various animals. They will also serve vegetables, fruits, and nuts for the side dishes that everybody can enjoy.

Their food will also differ from the places they conquer and take control of, like when they pillage civilized European nations, where they get to taste some exotic food that they don’t usually see in their lands.

They fill their tables with a lot of food beyond the warriors’ hunger but serves as a luxury for them who have been successful in raids, which turns into a gluttonous event for all people involved. It’s a big celebration for their countless success and their win over the lands and territories. All of them contributed to this success. Thus everyone is welcome to eat the quality food they did not have back in the Scandinavian terrains.

A Viking feast holds many traditions and cultural aspects of the Viking warriors. They were used to just getting by little to no food at all in Scandanavia, and with their newfound way of pillaging and ransacking, they get to experience what is it like to have ample daily resources.

Their ways have been in scrutiny by historians and researchers because of their brute and horrific actions towards being greedy and always wanting what they do not have. Having a feast is commendable as they celebrate their many victories, but you have to consider why the Viking ways did not continue to this day. People of this time have to learn from the past lessons that the Vikings harshly learned.

A Viking feast is a ceremonial tradition passed on to generations when people come together to celebrate and eat in a long table to seat everybody and food that will even last for days in the refrigerator. You will likely see this culture and tradition of eating together in and celebrating regular holidays like Christmas, thanksgiving, new years, birthdays, and celebrations alike.

Louie is the father behind the travel blog Browseeverywhere.com. He has a background in photography, E-commerce, and writing product reviews online at ConsumerReviews24. Traveling full time with his family was his ultimate past-time. If he’s not typing at his laptop, you can probably find him watching movies.